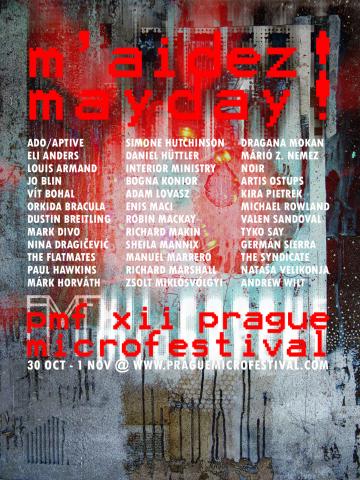 PMF is fully bilingual (CZ and EN), and presents readings by the best authors of contemporary poetry and fiction. Every year, PMF welcomes renowned and underground authors from across the world, staging them alongside film projections, music, performance and visual art, in a rich polylogue of artforms.

PMF is not only an arts space; it is a place for people to meet. With growing significance on the European cultural circuit, PMF remains integrated within local Prague culture, as a friendly environment fostering dialogue between international poets and art-producers; and local writers, students, and members of the public. Over the last eleven years, it has launched the careers of numerous talented young writers, translators, and cultural organisers.

It was originally conceived as the natural successor of the Prague International Poetry Festival (2004), which welcomed readings from more than 40 writers, over 20 countries. PMF remains centred on writing, with previous themes including visual writing, performative texts, phonic poetry, fiction on the border between language and music, intermedia writing, and conceptual and performance poetry, and many others.

Featured authors have included Alice Notley, winner of the Pulitzer Prize and Lenore Marshall Award (1998 and 2007 respectively), Pierre Joris, winner of the PEN Award for Poetry in Translation (2005), the American conceptual writer Vanessa Place, Barrett Watten (winner of the René Wellek prize, 2004), Keston Sutherland, Paal Bjelke Andersen, and many others, performing alongside established and emerging Czech authors including Jaromír Typlt (winner of the Jiří Orten prize, 1994), Ondřej Buddeus (winner of the Magnesia Litera Prize, 2014) and Markéta Baňková (winner of the best Czech book, 2016).

For more on previous editions of PMF, visit our websites from previous years.